In partnership with Ionis Pharmaceuticals, this program provides no-cost genetic testing for familial chylomicronemia syndrome (FCS), a genetic condition which is characterized by high plasma triglyceride levels resulting from improper breakdown of chylomicron lipoproteins by the LPL enzyme. No-cost FCS testing is available for patients with a clinical diagnosis of FCS and is being offered to residents of the US and Canada who meet testing eligibility criteria. The test must be ordered by a qualified healthcare provider.

The prevalence of FCS is around 1 per million individuals worldwide (Brahm et al. 2015. PubMed ID: 25732519), but in one study of French Canadians, the prevalence was observed to be as high as 200 per million individuals (Gagne et al. 1989. PubMed ID: 2914262). Diagnosis is complicated by several factors. For example, while many patients develop symptoms in childhood, many other patients are not diagnosed until their teens or later as symptoms like recurring pancreatitis and abdominal pain begin to occur more frequently. Reduced LPL enzyme activity is a key feature of FCS, and functional assays of LPL activity are used for making a diagnosis. However, such assays are not always readily available and the output of these assays often shows considerable variability (Chait and Eckel. 2019. PubMed ID: 31035285).

Genetic testing has emerged as the preferred method of FCS diagnosis because it allows for identification of the mutated FCS gene and distinguishes FCS from other much more common causes of chylomicronemia such as multifactorial chylomicronemia syndrome (MFCS) and familial partial lipodystrophy (FPLD) (Chait and Eckel. 2019. PubMed ID: 31035285). Therapeutic approaches to lowering triglyceride levels vary depending upon the cause of chylomicronemia. Lipid lowering drugs used to treat other metabolic lipid disor ders are ineffective in the treatment of FCS. The current standard of care for FCS involves a strict diet with extremely low levels of fat (<10-15 g/day), low carbohydrates, and little alcohol (Kawashiri et al. 2005. PubMed ID: 16174715).

The gene products of APOC2, APOA5, GPIHBP1, LMF1, and LPL are all involved in the breakdown of chylomicrons in plasma (Brahm and Hegele. 2015. PubMed ID: 25732519). GPD1 encodes glycerol-3-phosphate dehydrogenase-1, which catalyzes the interconversion of dihydroxyacetone phosphate and glycerol-3-phosphate (G3P); G3P is needed for synthesis of triglycerides (Basel-Vanagaite et al. 2012. PubMed ID: 22226083). CREB3L3 is a transcription factor that regulates expression of genes involved in triglyceride hydrolysis (Lee et al. 2011. PubMed ID: 21666694).

This test is performed via Sequencing and CNV Detection by NextGen Sequencing. 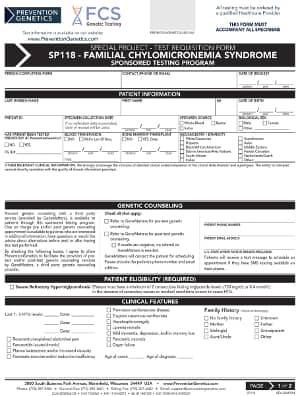